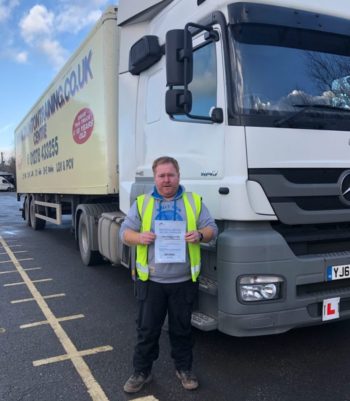 No, we’re not talking about the Spice Girls, despite the rumours that they’re re-forming! This is a story about Steve, who’s licence we upgraded earlier this year.

Steve’s relationship with Backline goes back to the early noughties, having previously been behind the wheel of a coach.

When he first joined us he had his HGV 2 licence and was doing work for various companies including South West Crane Hire and other HIAB work.

Ever since he’s known what a lorry was, he’s wanted to get his hands on an Class 1 licence, but life got in the way and he never got round to doing the training and taking the test.

Backline previously ran a series of licence upgrades in 2014, but Bridgwater wasn’t on the list of branches offering the upgrade. Steve held firm, however, and when he got the opportunity in late 2017, he jumped at the chance.

He completed the training in early 2018 and now has a “full house” as he describes it – holding both a Bus and Class 1 Lorry licence. He passed his artic licence on his first attempt, with just 4 minors (show off)! Although, he admits he thought that he’d failed the test about five minutes in, so for the rest of the time was treating it as a normal lesson.

It’s early days since obtaining his licence, so he’s not had the opportunity to use it a great deal yet. The trips he has made to Tilbury have all gone without a hitch so far. One of the benefits of being registered with Backline is the number of opportunities available to him to build his experience and really make the most of his new licence.

Asked whether he would recommend a licence upgrade to anyone else considering it, he replied:

“Yeah definitely as it will open doors and mean that you’re never going to be out of work. I’d say to anyone that if you get the chance, just go for it – if you love driving it will be one of the best things you do.”

If you’re interested in upgrading your licence, other related training or just curious as to what kind of work Backline can offer you, get in touch with your local branch today! Details at https://backlinelogistics.co.uk/branches