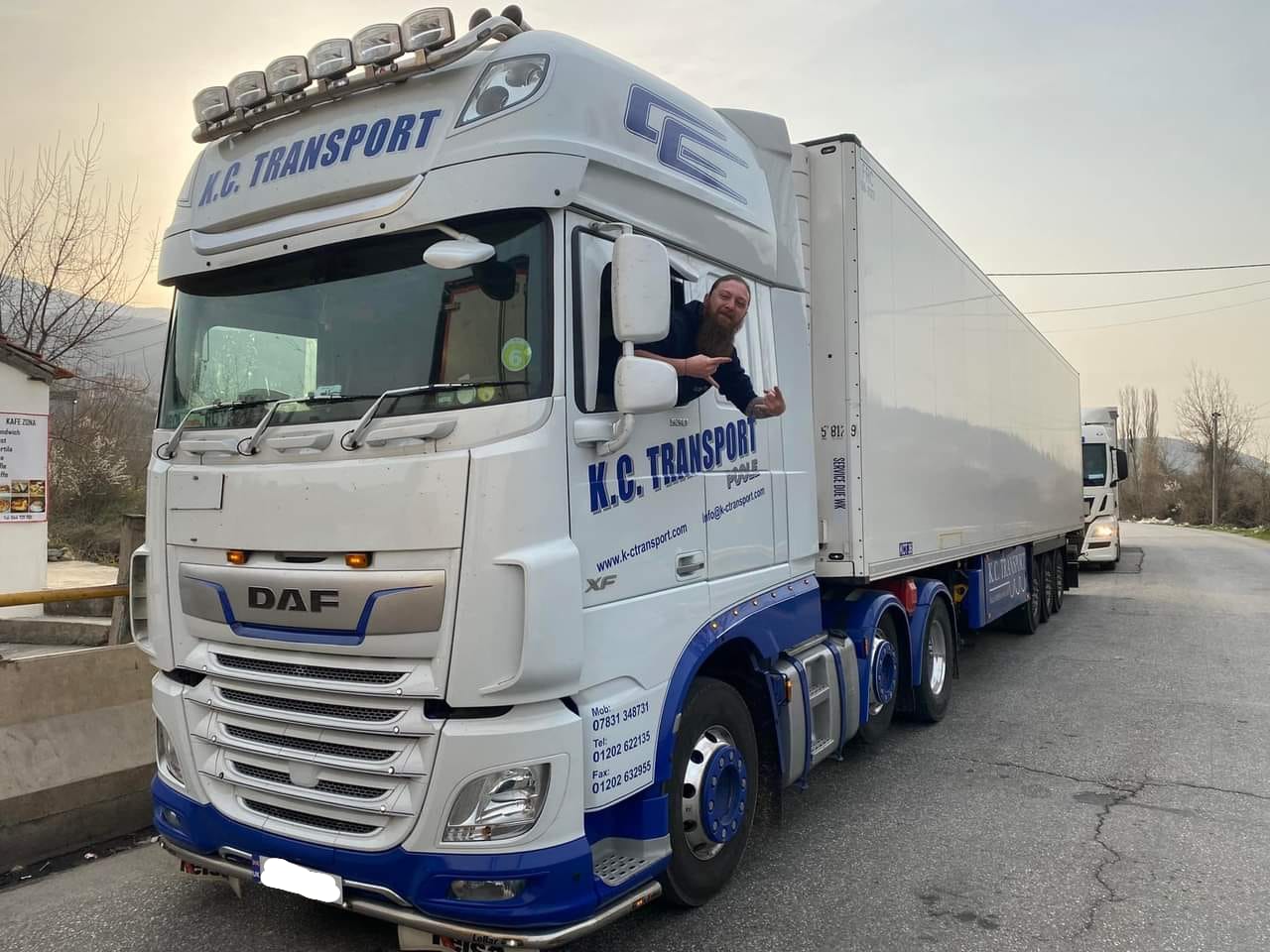 To continue our Backline Heroes Series, this month we caught up with HGV Driver, Roy Webb who tells us about his experience of traveling around the world as an HGV Driver.

Q: Hi Roy, thanks for taking the time to talk to us. At 36 years old you’re breaking the stereotype of HGV Drivers being old, what was it about the haulage industry that appealed to you?

A: About five or six years ago I was working for HSS Hire in their warehouse and driving a Sprinter van when they asked me to help load the other vehicles. I’d often be in the big trucks driving them around the yard, reversing them into position to be loaded and then driving them back out to the yard. Once I sat in the driver’s seat it felt like I was in a spaceship and it felt really cool. I’ve always enjoyed driving and it’s something I’m good at so I thought I’d explore opportunities further. HSS Hire had a long list of people who wanted to sit their Class 2 HGV Driving test, so I decided to put myself through it and I’ve never looked back.

Q: Was Backline the first company you worked for as a full-time HGV Driver?

A: My first full-time job as a driver was with a company called Parsons, who were a client of Backline at the time. A mate of mine was a driver for Backline and he’s the one who told me that Backline were actively recruiting for drivers. So I applied for a job and got accepted as a Class 2 Driver. After 18 months I then decided to take my Class 1 HGV Driving test, passed and started driving the big artic lorries.

Q: What’s your favourite thing about working with Backline?

A: I love the variety of jobs you get given, so no two weeks are ever the same. One day you can be driving a milk tanker around the winding roads of Dartmoor and the next you can be delivering a one-off shipment to a business in Ireland. Or, you could be covering for another driver who’s on sick leave so you get used to becoming part of their team for a while too.

Q: As an HGV Driver there are certain tests that you need to pass to remain compliant. As an individual driver do you have to pay for these out of your own pocket or do Backline help with financial commitment?

A: When I did my HIAB Training, Backline paid for the training course and also paid me for attending so that I didn’t miss out on a day’s wages. I did that three and a half years ago and now I’m given all sorts of jobs around Devon that require a driver who’s qualified to handle a crane.

Q: During the Covid-19 pandemic you started working abroad didn’t you, delivering supplies to other European countries. How did that come about?

A: Yeah, at the start of the first lockdown we were put on furlough to begin with but after a while we were told that furlough had to come to an end. Tim did all he could to find me additional work, but in the end I signed up to work for another two haulage companies who were delivering goods in and out of Europe.

The trucks I was driving had sleeper cabs that were kitted out with a bed, TV and microwave, so everything you needed was all in one place. Throughout the lockdown there were only three European countries that I didn’t visit. It was a great way to travel the world and get paid for the privilege.

And you get to do really cool things too. There’s a new Indiana Jones film coming out soon and I was the one to deliver the props they used on set. I picked them up from Pinewood Studios in Hertfordshire and drove them to Morocco. I’ve delivered military vehicles to Ukraine and military supplies to North Macedonia, Kosovo and Albania.

Q: Oh wow. Did you ever come back to the UK during that time or would you go from one job to the next while abroad?

A: The longest stint abroad was about two and a half months, but for the rest of the time I’d drive abroad, come back to the UK and see family, do my washing and then head off again. Sometimes I’d pick up small jobs during the week in the UK before setting off again on the weekend.

Q: What were the roads like during lockdowns, I imagine it was vastly different to what you’re usually used to?

Q: You’re now back with Backline full-time, what made you decide to end your European driving adventure?

A: Driving on your own and being out on the road for long periods of time is actually quite isolating. And even though it’s nice to come home for the weekend to see your family, the time goes too quickly before you’re off again. My girlfriend has a child and I started to resent not being around to see them and support them. I’d never say never to doing it again, but for the time being I’m happy to be back in the UK with my family and the Backline family.

Q: Were Tim and the Backline team happy to have you back?

A: Yeah, I think so! It’s really great to be back. In some companies you just feel like another bum on the seat, but at Backline they make you feel like part of the team and always put you and your needs first. In fact, I’d say they’re the only employer I’ve ever had that truly cares about me. When I spoke to Tim about working abroad he was really supportive and told me to do what’s right for me and my family, which I think is rare in any industry, not just the haulage industry. He made it really clear that I’d be welcomed back and I’m glad to be back working for a company that’s so friendly and welcoming.

Q: And finally, if you were to give advice to younger generations about truck driving, what would you say?

A: Hmm, it’s interesting because when I was at school, truck driving was never mentioned as a career path – you either went into manual work, such as construction or engineering, or you went to uni or got an office job. I think a lot of young adults would love the freedom that truck driving brings, as well as the stable income and a real variety in work.

It does take a certain type of someone to make truck driving a success because it can be lonely, but having an HGV licence is probably one of the most sensible things you can ever do as truck drivers really do keep the world turning.