The HGV driver shortage: Does it actually exist?

We’ve All Heard It

If you work in the Transport & Logistics sector, you’re bound to have had a conversation or two at some point about the HGV driver shortage. But, is there actually a shortage, or is the problem something else entirely?

Let’s Start With The Numbers

We did some research into the actual data behind the claim that there is a driver shortage in the UK and this is what we found.

As of Mid-2018 there were a total of 311,973 people with a valid category C or C+E driving licence entitlement. This is up from 285,000  quoted in a BBC report in 2014. That seems like a lot, but we should remember that not everyone with an HGV licence will be working as an HGV driver.

According to an article in a national newspaper “Haulage bosses need to train 45,000 new truckers just to fill existing vacancies…the shortage is growing at the rate of 50 a day – with a further 20,000 expected to quit by the end of the year….”

Whilst the rhetoric would certainly suggest there is a shortage, the numbers don’t necessarily agree. As we’ve already seen, there appears to have been an increase of around 10% of people with HGV licences between 2014 and 2018.

This is a possibility. However, if we look at the number of people taking their Driver CPC, the figures aren’t conclusive.

From April ’17 to March ’18 there were a total of 73,081 Driver Qualification Cards (DQCs) issued – source: government statistics on DQCs. The figure is pretty static for previous years, too, so this wasn’t just a one-off. Multiply this over the five years that drivers have to complete their CPC training and it leaves you with around 370,000 professional drivers.

However, some of these will be for the 160,000 bus and coach drivers that are out there. Plus there will of course be people retiring at the same time.

Are we missing something?

Ultimately, it’s pretty tricky to tell whether there’s a driver shortage full stop, or whether the problem lies in the availability of drivers caused by other factors.

One thing that is obvious when looking at the numbers is the stark difference between the number of men and women in the industry. 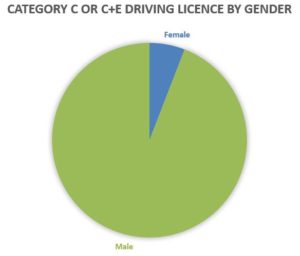 51% of the population is female, yet less than 6% of HGV drivers are female. That puts HGV drivers as one of the most underrepresented industries when it comes to womens’ involvement.

Could Women Be The Answer?

Theoretically, if the numbers were to balance, there would be potentially another 275,000 HGV drivers available for work which would more than address the shortage being claimed by industry commentators.

Is the industry attractive enough to women? Long hours, heavy work, a very masculine environment are all factors which are potentially putting women off, but there are those who are unperturbed.

What are we doing?

Backline are taking a number of steps to encourage people into the industry.

For example, we have launched our Platinum Driver scheme, aimed at offering industry-leading terms and conditions for HGV drivers that simply aren’t on offer anywhere else.

Find out more about platinum

We’re also working on an Apprenticeship programme which will see would-be drivers obtain their HGV licence in just 12 weeks. They won’t have to pay for the training and they’ll even be earning full-time wages whilst they train. Once they’re qualified, they’ll be available to support our client base with holiday, sickness and peak cover.

Companies such as Gregory Distribution run similar schemes but these drivers are, quite understandably, likely to stick in the job they’re in – so only the company running the scheme would see the benefit here.

We’d love to keep you updated with more articles like this one. You can sign up to our newsletter: