Backline Branches: A Focus on Christchurch 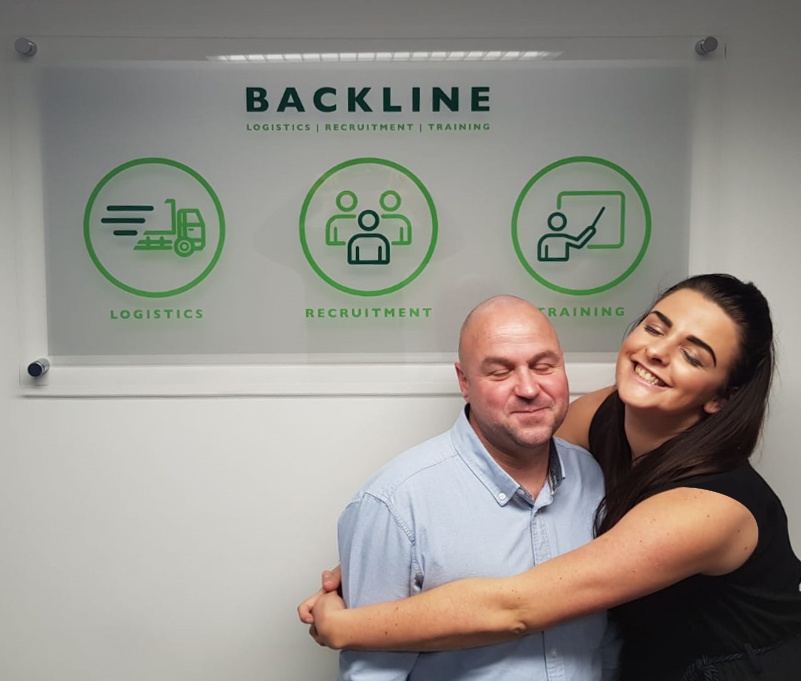 Backline’s Christchurch branch opened its doors in July 2018. Now that it’s well established, we’ve spoken to Harriet and Ian to find out a little bit more about what makes them tick so you can get to know the people you’ll be dealing with.

Off to a Winning Start – Congratulations!

Since we conducted this interview, Christchurch branch were awarded Branch of the Year for their storming success.

Tell us a bit about your professional background?

I started off working at an estate agent as administrator and within one year I’d been promoted to accounts manager. I was eventually given the opportunity to open a brand new branch from scratch, being responsible for all aspects of the branch including recruitment, database building and so on. In 2016 I had my second child, Hendrix, and returned to work as PA to the Mayor of Ferndown four months later, before joining Backline!

How long have you been working for Backline now?

I’ve been with Backline since April 2018.

What attracted you to working with Backline?

I really enjoyed the challenge of opening the new branch with the estate agency so was keen to have the opportunity to replicate that success, which was a perfect fit with Backline looking to expand in the area. I also got on really well with Kate who was going to be the Regional Manager for the branch and had an interest and understanding of Logistics from my Dad’s work in Supply Chains.

How does working with Backline compare to your expectations?

That’s difficult to say as I didn’t come into the job with any particular expectations – partly as I wasn’t previously aware of Backline having worked in a completely different sector until I got the job.

What have you enjoyed most about working in the Christchurch branch?

I’ve really enjoyed the results that we’ve seen, going from a standing start to over 100% of target within just weeks of opening.

What has been your biggest challenge?

The main challenge has been the logistical aspect of setting up a branch from scratch in a completely new location. Competition in the area is particularly hot and, as Backline were new to the area, getting our name out there with drivers and clients has been tough. Having said that, I relish a challenge and when something isn’t straightforward it drives me even more to achieve it!

What are you looking forward to most in the next 12 months?

Seeing the branch grow – hopefully maintaining the same pace of growth as we’ve experienced since July when we opened.

I’d like to say thanks to the support Kate has given me – her experience and dedication has been invaluable. It’s also great to have now the support of Ian who will facilitate the continued growth of the branch. He’s settled in really well so far

Recruitment consultant for the Christchurch branch, Ian Lillington, was up next. We asked him the same questions and this is what he said:

Tell us a bit about your professional background?

I was in the army for around 12 years. I left the army in 2010 and transitioned into the transport industry as a driver in various areas from parcels through to heavier haulage using my HGV class 1 licence. This was how I first came into contact with Backline, through working as a driver with their Winchester branch in 2016.

How long have you been working for Backline now?

Full time since September 2018 as a driver and then I started working with Harriet in the Christchurch branch from late October this year [2018].

What attracted you to working with Backline?

From a driver’s point of view, I wanted the variety of work which Backline were able to offer. Then when the position came about in the Christchurch branch, I wanted to take the opportunity to pass on my knowledge and experience to other drivers.

How does working with Backline compare to your expectations?

Having never been office-based in previous roles, other than as a transport manager with the army (which isn’t really comparable!) I wasn’t sure exactly what to expect but I have definitely enjoyed the challenge so far.

What have you enjoyed most about working in the Christchurch branch?

Meeting new drivers has been great and being able to help other drivers that are in a similar position to the position I was in previously. I really enjoy being able to deal with other people on a daily basis.

What has been your biggest challenge?

The high-pressure nature of the recruitment side of things has been tough. Clients will often have requirements with very tight time-frames, which can involve both sourcing and interviewing large numbers of candidates within a very short period of time.

What are you looking forward to most in the next 12 months?

I’m looking forward to being involved with the growth of the Christchurch branch as I’m impressed by where its got to in such a short space of time. Also looking forward to developing my skills wherever I can within the business as a whole, for example assisting with the training division where possible.

Working with Harriet has been enjoyable, although she’s a very hard task master – she’s very determined to be the best, but at the same time, she’s realistic and fair.

If you’d like to contact our Christchurch branch, simply enter your details below and we’ll be in touch!