A Day In The Life Of A: Palletised MultiDrop Driver 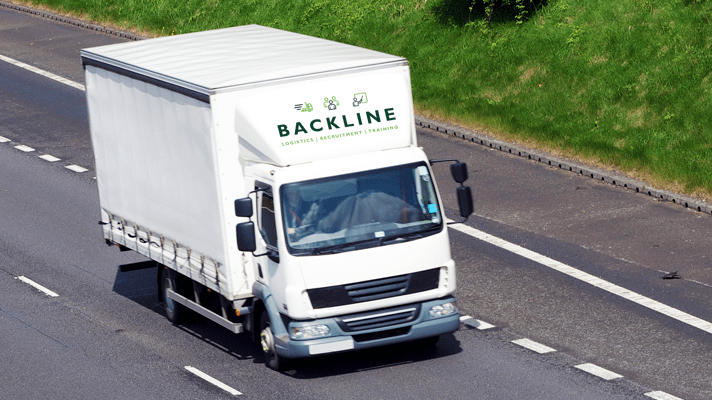 I suppose I should start this with a disclaimer: the multi-drop palletised delivery experience will vary massively between companies. Some are better organised than others and/or simply deal with less volume, which makes planning a much less onerous task and reduces the possibility of complications.

This was one of the good days – we’ll cover the bad and the ugly in another post!

Report to the office. Despite being a late name change the night before thanks to a driver pulling out of the booking at short notice, they are expecting me. Good sign.

The transport supervisor talks me through their paperwork and their PDA system which seems quite decent and incorporates a sat-nav which is set up for trucks. They’re not perfect but tend to be noticeably better than one that isn’t.

Loaded, checks complete and heading out the yard – result!

Notes on the paperwork say that the customer requires a call 30 mins before delivery. Not sure whether he was expecting one this early! All fairly straightforward this one. An smart exercise bike that connects to YouTube and a whole host of other services. Perhaps he’ll be watching some trucking vlogs while he’s burning those calories!

Strictly a kerbside service but he asks if I can put it in his garage which is about 10ft away so I do.

10 or so boxes of uniform on a pallet for Brittany Ferries. I reported to the security gate by the freight area who (not intentionally) sent me on a wild goose chase before I finally located the delivery point which was a building no more than a few metres from the security one!

The storeman wasn’t too impressed to see me. “It is only the one pallet.” I try to reassure him. “Have you seen the state of my store?!” he says! To be fair he’s not frustrated at me – just that no one seemed to have told him what was coming. He whips the pallet off with the forklift and I’m on my way.

Only about 5 minutes away, a delivery to Stonehouse Barracks. No idea what it was – but I didn’t fancy facing an interrogation by the Marines so I didn’t bother to ask!

Another Plymouth drop, this time to an industrial unit on the Parkway Industrial Estate. Fingers crossed for a Forklift.

We’re in luck! That’s 75% forklift drops so far. Today is going well! Two pallets this time, so opened the doors and took the pallets to the back of the truck for them to be lifted off.

Out to Ivybridge (15-20 min drive) with another exercise bike. This time the sat-nav doesn’t quite suffice. First it takes me off a junction too early (it’s actually a little village a couple of miles outside Ivybridge), then it tries to send me down a lane that definitely wasn’t designed for trucks (low trees, heavily overgrown foliage & pokey-out walls/banks). Unfortunately it didn’t become apparent until ¼ mile down that it was more than just very tight. Fortunately a very helpful lady who lived in one of the few nearby houses kindly agreed to stop traffic on the main road that I had to reverse back out onto.

Pull over and check for alternative routes, there’s another option a few hundred yards down the road which – by Google Street View – looks far more appropriate. Turns out it is.

As is often the case with the prevalence of online delivery for stuff that’s bigger than a parcel, customers get confused when you don’t automatically take the pallet away. The look of panic as you head back to your truck leaving it with the delivery is an all too common sight. On this occasion she asked nicely so I obliged!

Next job is a collection from a company that does engineering for steam trains. I was unsure of this in the morning given I was only in a 7.5 tonner so had to check the payload with the traffic office (it wasn’t anywhere obvious on the truck) but we knew it would be somewhere between 2-3 tonnes. A text had come through telling me it was 2.85.

On arrival it’s clear there was no need to worry. The collection is what looks like some sort of archway trim which can’t have weighed much more than about 20kg! Handy as it’s an oversize pallet but being light meant it was easy to shuffle round if I needed to.

I was only about 5 hours through my shift but thanks to the early(ish) start was beginning to feel peckish!

Two pallets of window-cleaning chemicals from a manufacturer/distributor in Newton Abbot. Again there’s a forklift on-site which makes loading much easier, especially as I still had two deliveries onboard.

These could have fitted in a van no trouble! No forklift or pallet truck required for two cartons of something relating to door seals with a total weight of about 15kg.

No pallet truck required for this one – just a large box weighing 5kg if that. The unit for the delivery was completely shut up but one of the neighbouring units told me the café a few units down had a key.

Off I went – picking up a snack and a drink at the same time. One more drop and a collection to go. Fingers crossed the rest of the day goes as smoothly!

A patio heater this time to a little town near Exeter. Having avoided the rain all day it now started hammering it down! The chap receiving the delivery clearly had mobility issues and asked if I could take it into his back garden. As it was only about 15m round the side of the house and pallet truck access was good I agreed. The rain had already got me wet so a few more drops wasn’t going to hurt!

A message pops up on the comms unit to say that the collection has been cancelled. Result! That’s the last thing on the list so I head home.

Back to the yard about 3.30 The client had asked me to refuel at the end of the day. I’d assumed there was a fuel pump in the yard. I’d assumed wrong! Fortunately there’s a fuel station just down the road and it only took a few moments to locate the fuel card that had been buried under the receipts in the drawer.

Fuelled up, daily checks complete, tacho downloaded and collections off by 16:15. Unusual for a day of multi-drop! The early(ish) start had been worth it…

It takes a certain type of driver to be able to cope with the variation that comes working with a recruitment business such as Backline.

Think you’ve got what it takes?